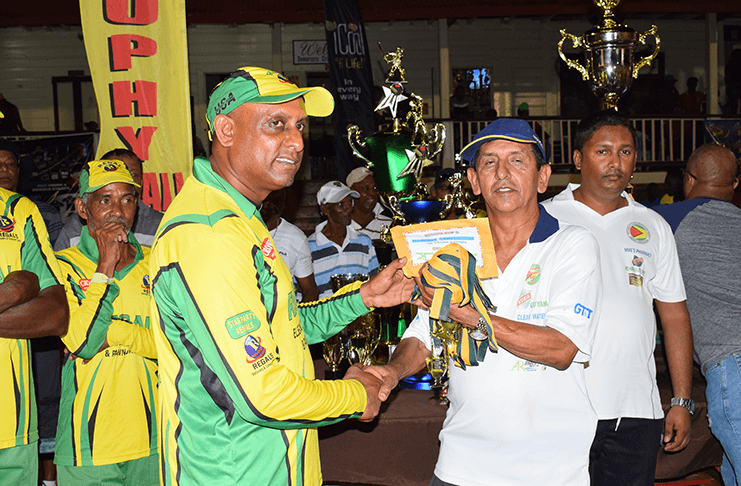 REGAL Masters proved their superiority with their second major triumph in as many weeks with a comprehensive victory over Fisherman’s Masters in yesterday’s final of the Masters (Over-45) category of the Guyana Softball Cup 8, organised by the Guyana Floodlights Softball Cricket Association (GFSCA).

Witnessed by a bumper crowd at the Demerara Cricket Club (DCC) ground, Queenstown, Regal Masters romped to a 60-run victory after limiting Fisherman’s Masters to 158 for five in their allotted 20 overs in pursuit of 219 for victory. The triumph followed their win against Mike’s Wellman in last week’s Prime Minister Cup final, organised by the Georgetown Softball League, played at the Everest Cricket Club ground.

Asked to take first strike, Regal Masters were powered to 218 for seven through the efforts of their skipper, Mahendra Arjune, who followed up his masterful all-round performance in last Sunday’s Prime Minister Cup final, when he captured the man-of-the-match award, with another superb batting display. He also copped the award on this occasion.

The experienced Arjune, who seemed to be glowing with age, blasted a 34-ball 72 and, along with Eon Abel (39), added a match-winning 104 for the third wicket after opener Throy Kippins had given the innings an impetus with 47, laced with eight fours and a six. Kippins had earlier put on 44 for the second wicket, after Mahesh Chunilall went with the score on 28 in the third over.

Fisherman’s Masters made a bold start but struggled in the middle overs as Regal Masters took  a tight rein on proceedings. Fazal Ali played well for a fine 50 while Baldeo Persaud supported with 40. Fazleen Mohamed took two for 32.

Regal Masters pocketed $600,000, a trophy and medals for all the players while the runner-up took home $150,000. The MVP award for the category went to Yunis Usuff of GFSCA. Three players – Shiv Seeram (Ontario Masters International), Ramo Malone (GFSCA) and Baldeo Persaud (Fisherman Masters) registered centuries while Jaimini Singh (Ontario Masters International) was the lone bowler to take five wickets in a match. They all received trophies.

Parika Defenders became the first-ever Over-50 winners, denying the Guyana Softball Cricket Association (GFSCA) any title in this year’s tournament, winning their clash by 25 runs.

Led by a classy 73 from opener Rasheed Mohamed and a supporting knock of 53 not out from his  brother Saddiq, Parika Defenders reached an imposing 214 for four in their allotted overs. Rasheed struck seven sixes and three fours while Saddiq’s innings contained five sixes and a four. Oswald Chandler also supported with 48 (five sixes and a four), while sharing an important second wicket partnership of 104 with Rasheed. There was one wicket each for Vickey Ramsaywack, Hakim Majeed and Randolph Perreira.

The arduous task proved beyond the GFSCA Legends, who ended on 189 for six when their 20 overs expired, with Sahadeo Budhoo (38), Richard Persaud (27) and Majeed (21) being the principal scorers.

At the Over-50 presentation, Tony Fernandez of the New York Softball Cricket League (NYSCL) was awarded the MVP and also collected a prize for scoring a century. Imam Gafoor also received a prize for his hundred. The man-of-the-match in the final was Rasheed Mohamed.

All trophies and medals were donated by Trophy Stall’s Ramesh Sunich.