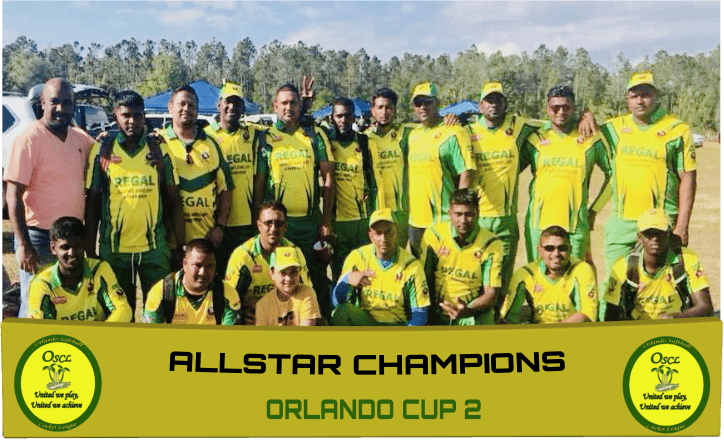 A BLISTERING knock of 53 off 23 balls from Sarfaz Esau saw Regal All Stars knock over Assassins by seven wickets in the final of the Orlando Softball Cricket League (OSCL) Orlando Cup two on Sunday at the Hogshead Park in Florida.

In brilliant sunshine and in front of a huge crowd, Regal skipper Esau first won the toss and took the field. In the preliminary rounds on Friday, Regal bowled out their opponents in the final for just 69 runs and were on course for a repeat; but some lower-order resistance saw the New York-based team rally to 131 for 9 from 20 overs.
Roger Parsram hit one six and three fours in Assassins’ top score of 29 and was supported by Prem Singh with 18 not out (1×6) and Pooran Beria with 17 (2×4).
Once again the Regal All Stars’ bowling was led by Rohit ‘Beast’ Dutchin with 2 for 20, with Fazal Rafeik with 2 for 36 supporting well as were the other bowlers and excellent fielders. In reply, Regal All Stars lost the tournament’s Most Valuable Player (MVP) Richard Latif without scoring halfway through the opening over to a catch at the wicket off Prem Singh (2-41).
However, Esau came to the crease and immediately took the attack to the opposition on the relatively big outfield. In all, he hit three sixes and seven beautifully-timed fours in a quick 67-run second-wicket partnership with opener Navin Singh.

When he was dismissed at 68 for 2, Singh took over and dominated a 47-run stand with Rafeik who made 16 (1×6) before he was dismissed with just 17 runs required for victory. Singh continued to hit the ball sweetly and remained unbeaten on 45 (3×6; 2×4) as Regal reached 132 for 3 off 14.2 overs to win by 7 wickets with 5.4 overs remaining. Sewchand Budhu was not out on one.
Regal took the winning Orlando Cup and US$4 000 while Esau was named man-of-the-match in the final. Regal bowler Delroy Perreira was adjudged the tournament’s best bowler and Latif the best batsman.

In the Masters Over-54 years old, Ramesh Narine singlehandedly took Floodlights Masters to victory over nemeses Regal Masters. Narine, also fondly called the ‘Little Master’, took six balls to get off the mark due to excellent bowling first up from the Regal opening bowlers. However, after getting his eyes in, he then used his next 50 balls to reach a well-compiled century in the final over of the innings. His heroics of 100 not out from 56 balls (9×6, 3×4) was really the difference in his side’s winning by 12 runs in a tantalising affair. At 34 for 3 in the seventh over after winning the toss and batting, Floodlights needed a miracle and they got it through Narine.

The Essequibian featured in a 74-run fourth-wicket partnership with Ravi Lutchman who made 31 (2×6, 2×4) that really rescued Floodlights. When Ravi Lutchman was bowled by Fazleem Mohamed in the 14th over his brother, Akash joined Narine and continued the slugfest. Akash made 14.
After losing two wickets in the 15th over, Narine motored along to help Floodlights core 63 runs off the next five overs including 18 off the last over to bring up his hundred. Floodlights ended on 192 for 9. Opening bowler David Harper picked up 2 for 28 and his opening partner Parsram Persaud 1-25. Throy Kippins with 2 for 46 (4 overs) and Fazleem Mohamed 1-22 (2 overs) also got wickets but were not spared the assault.

Regal Masters captain Mahendra Hardyal bowled impressively despite not picking up a wicket. His first three overs yielded 18 runs but he was taken to the cleaners in his final over which went for 18 to finish wicket-less for 36 runs. In reply, the Regal Masters needed to score at just under 10 runs per over to win but were hot and cold in the chase and eventually ended on 181 for 8 falling short by 12 runs. Opener Mahesh Chunilall, with 147 runs in three innings before the final with two half-centuries, was first to go in the fourth over at 12 for 1.
Rudolph Baker then joined his skipper Hardyal at the crease and blasted 38 from 21 balls (3×6; 3×4) before he was run-out. His cameo brought the contest back in the balance until Eon Abel (7) and Hardyal were dismissed in quick succession to hand the momentum back to their opponents.

The pendulum swung in Regal’s favour once again when Eric Thomas smashed 56 off 26 balls (4×6; 5×4) and shared in a 65-run partnership with Mohendra Arjune who made 15. When Thomas became another run-out victim in the 19th over at 169 for 6, there were still 23 runs to get from almost two overs, which turned out to be a tall task for the lower order and eventually Floodlights took the championship. Akash Lutchman (2-18) and Ramesh Narine (2-20) were the pick of the Floodlights bowlers.

At the presentation ceremony, Narine was named man-of-the-match while Bhim George was the MVP and Masters Over-45 tournament’s best batsman. Hardyal won the best bowler prize and collected the purple cap and shirt along with a trophy. In the Masters Over-50 category, Orlando Masters were adjudged champions after a high-scoring final with New York Masters Premier.

In all, the three-day tournament attracted 25 teams in the three categories and was held at two venues. The next stop on the international softball calendar is New York for the Independence Cup in July.