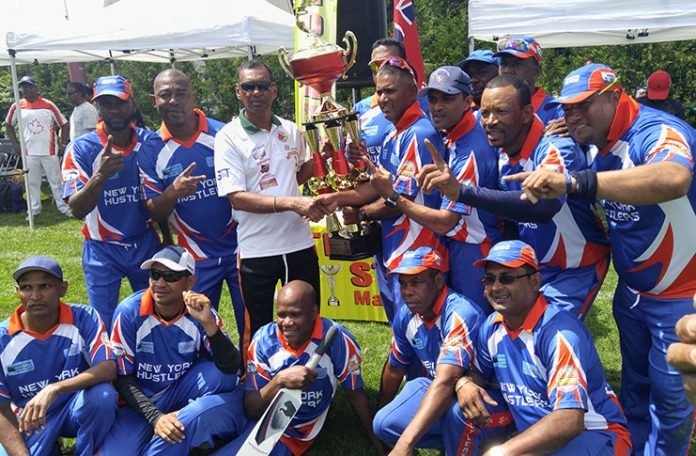 TORONTO, Canada –Three players who featured prominently in the Ontario Masters Cricket Clubs (OMSCC) inaugural Toronto Cup, were again at the forefront as their respective teams secured victories when the second edition climaxed at the picturesque University of Toronto ground here on Sunday.
In 2015, skipper Anil Beharry, with a fine bowling display which earned him the man-of-the-match award, propelled New York Enforcers to the Open title. This time around, he was again brilliant with the ball as his team New York SVC Mafia defeated their counterparts New York Softball Cricket League (NYSCL) All Stars by five wickets to claim the Open championship.
Similarly, it was the batting of former Guyana Under-19 player Troy Gobin and former Canadian player Desmond Cholmondeley with scores of 43 not out and 36 respectively which ensured Our Own’s success versus Guyana Floodlights Softball Cricket Association (GFSCA) two years ago.
Donning colours for New York Hustlers on Sunday, Gobin (35 not out) and Cholmondeley unbeaten on 40, featured in an unbroken 75-run second-wicket stand which took their team to an easy nine-wicket win over the Ontario Masters Softball International (OMSI) and with it, the Masters crown.
Unlike the previous day when the weather was unusually cold for this time of the year, Sunday was picture perfect for cricket but low scores were the order of the day as no teams reached a hundred. NYSCL started disastrously, losing both openers in the first over, Amar Singh (0) going via run-out and Vickey Subkaran (one) caught off the bowling of Sewchand Budhu. Thereafter, it was a struggle as SVC were never let off the hook as Beharry (two for eight), Azad Azeez (two for eight) and Budhu (two for 12) restricted them to 84.
Needing just over fours runs per over to achieve victory, SVC Mafia batted sensibly to secure an easy win with four overs to spare, losing five wickets in the process. Rooplall Singh (18), Sarfraz Esau (15) and Budhu (14 not out) were the top scorers.
It was all New York Hustlers in the day’s opening encounter as OMSI failed to live up to the pre-game hype, much to the disappointment of their home fans, after defeating pre-tournament favourites GFSCA in Saturday’s semi-final.
Set 99 for victory, after dismissing OMSI for 98 in 19 overs, New York Hustlers raced to 100 for one in just 14 overs with Gobin and Cholmondeley sharing an enterprising second-wicket partnership of 75 after captain and former Guyana Under-19 player Shameer Sadloo (five) had departed in the sixth over with 25 on the board. The lone wicket went to Jesh Parasnauth.
Earlier, a superb opening spell by Satrohan ‘Blade’ Balkarran, who sent back skipper Shiv Seeram and Sunil Dhaniram (0) in the fifth over, broke the back of the OMSI innings from which they never fully recovered.
It took a sixth-wicket stand of 37 between Parasnauth (29) and Terry Mathura (eight) to bring some respectability to the score but once the two departed the innings folded quickly. Parasnauth, who dominated the partnership, struck three fours.
Balkarran was ably supported by Eustace Dodson who claimed the last four wickets for a mere 10 runs from his two overs while Ronald Evelyn chipped in with two for 27 from his four.

At the impressive presentation ceremony which followed, the victorious team in the Masters category received US$2500 and the trophy while they were also in receipt of an additional US$500, compliments of Canada-based Guyanese Surendra Persaud. Runners-up OMSI collected US$300 and a trophy.
The Open category saw SVC Mafia receive US$2000 and a trophy while the runners-up got US$200 and a trophy. Beharry was named man-of-the-match for his impressive bowling in the Open final while Budhu gained the Most Valuable Player award for his nine wickets and score of 84 runs from four games.
Dodson copped the man-of-the-match in the Masters division while Balkarran’s sterling bowling efforts, which saw him bag 10 wickets for 37 runs in five matches, earned him the MVP award.
Shiv Seeram, the only player to score a century in the tournament, was awarded for his magnificent undefeated 114.
All the trophies and medals were sponsored by Trophy Stall (Guyana) and Toronto and on hand to assist with the presentation were proprietor Ramesh Sunich and daughter Emma.