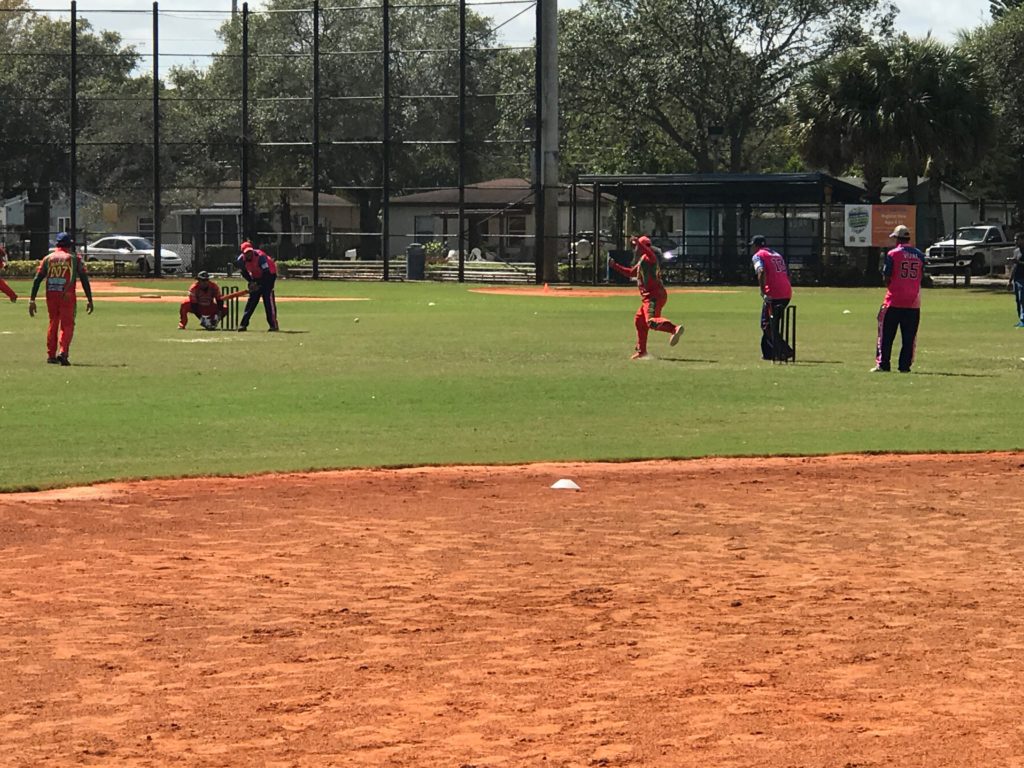 First game of the 2017 spring season we saw the clash of the Titians; it was Hurricanes Vs Hustlers. We saw the return of two veterans debuting for Hustlers after taking a few seasons off. After winning the toss Hustlers decided to bat first. Game plan was to put as much runs on the board and to bat long innings. Hurricanes game plan bowl out hustlers for cheap.

Hustlers opening pair was no other than the hard hitting, top all-rounder Kevin Budhna, and the veteran Vijai Narine. Hurricane choose to open with pace and distributed Tony Nokta the ball. As the first ball Kevin face was a dot, follow with 2 wide balls, then another dot follows with a beautiful 4, 2 dots and another 4. First over Hustlers were 10 for no loss. Hurricane decided to continue with pace and nominate their top bowler Ansar. Ansar was hit for an immense 6 by the veteran, however Vijai tried to hit another 6 but found the hands of Mukesh. Hustlers skipper decided to promote himself and elect to bat # 3. At the end of the 2nd over hustlers were 18 for 1. Nokta continued his spell with a splendid maiden over against two of South Florida’s most dangerous batsman. Ansar would continue and get the break through again for Hurricane as he would pick up the wickets of Anil and Trevor. After the 4 over Hustlers were 22 for 3.  Tony would deliver yet another magnificent maiden wicket over as he would clean bowl Naz (Slim Jim). With the score being 23 for 4 hurricane game strategy was working as plan their bowler was doing a magnificent job with the ball and their fielding was outstanding. As spectator would say Hustlers camp was extremely quiet. We saw the little cow (smally) being promoted to bat at # 7, but didn’t stay very long at the crease, he was quick to get caught by Ansar, bowlded by Jamesie. Next batsman for Hustlers was the Romel (butters), he was batting with Ravi Sing superbly. However, with a deadly yoker Ravi Singh innings would come to an end. Hustlers decided to send another veteran Rajin Ramnarine. Rajin was caught behind without troubling the score, Hustlers was seriously in trouble with the score being 69 for 8. With only 2 batsmen left outside hustlers decided to send Ravin Ramnarine (Brett Lee). As Hurricane would say let’s get these tail-enders out of here and we can bowl out Hustlers for less than 75 runs. However, both Romel and Ravin would hand it to the Hurricane bowlers and it was raining 6 and 4’s. Hurricane players were getting very frustrated and tried everything to break the partnership but the more they tried the further the ball went.  These two batsman took the runs from 69 to 145 before a miscommunication cause a run out of Romel. Booth was the next batsman to join Ravin. As they tried to reach the 150 mark, before Ravin was bowled by Mukesh. After the first innings hustlers were all out for 146 and batted 18.1 overs.

Hurricanes would elect to open with the captain- Mervin (Duck), and Stevenson. Hustlers know they were chasing a low total and decide to open with Naz. In the first over hurricanes almost (like I said almost) lost Stevenson when he reverse sweep the ball straight to Ravi Sing, but was drop – a simple catch too much current and not enough signal cause Ravi Sing to lose focus on the ball. After the first over Hurricane was 3 for no loss. Trevor Persaud was brought on as he would pick up the wicket of the captain (Mervin) who was caught by Romel, and the wicket of Paul. Hurricane knees were shaking after losing 2 quick wickets. Hurricane next batsman was Morgan. As one can admit it was a great partnership between Stevenson and Morgan as they would guide hurricanes closer to victory. However, Stevenson was bowled by Naz for a stabling 75 runs. Ansar was the next hitter as he and Morgan would cruise home to victory.

Over all great game Hustlers took their loss like a true Champion and went straight to the cooler…Sad news there wasn’t any Bud Light Lime only Coors Light.