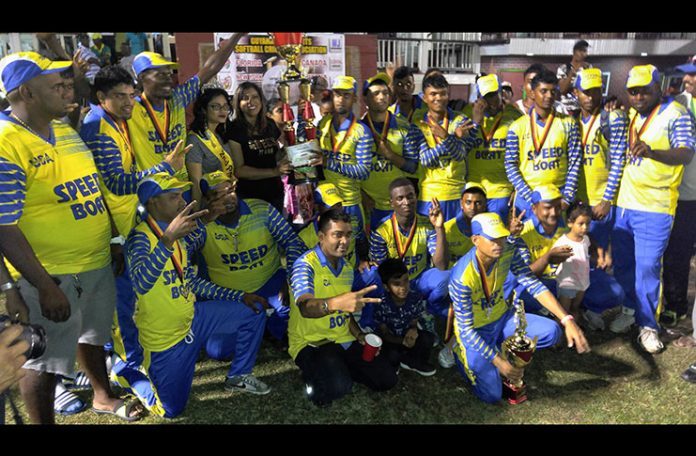 HISTORY was created at the Demerara Cricket Club (DCC) ground, Queenstown, on Sunday night when Speedboat became the first team to retain championship honours in the Open category when the seventh edition of the Guyana Softball Cricket Association (GFSCA) Guyana Softball Cup concluded close to midnight before a raucous crowd.
In a sensational turn of events, after they seemed destined to end up in the runner-up spot, Speedboat showed great resilience to snatch victory from the jaws of defeat in the final overs.
Victory was achieved off the final delivery of the 20-over affair when man-of-the-match, Mark Harold claimed his fourth wicket of the over, all bowled as the lighted bails, used for the first time in the tournament, kept flashing consistently.

In the end, opponents and newcomers Booths All Stars were dismissed for 124, pursuing 129 for victory and what would have been their second consecutive win over the champions, having defeated them in their opening fixture at the Police Sports Club ground last Friday.
The victory meant Speedboat had earned the top prize of $800 000 and the Trophy Stall trophy while Booths All Stars pocketed $200 000 and the runner-up trophy. It was also their second triumph in consecutive weeks following their win the previous weekend in the Georgetown Softball League (GSL) tournament.
The game promised to be a cracker after Booths All Stars’ win in the opening encounter and it certainly lived up to its pre-game hype. Adopting what seemed an ultra cautious approach, although within striking distance of the required run rate, Booths All Stars were comfortably placed at 99 for three at the end of the 16th over, needing a further 28 runs from 20 deliveries.

MVP Mark Harold being presented his award by Miss India Guyana. Booths All Stars were indebted to a fourth wicket partnership of 48 between skipper Eyaaz Mohamed (37) and Christopher Geenarine (22), but suddenly panic seemed to have stepped in with the dismissal of the latter. However, Speedboat, using their vast experience, kept a cooler head.
At 109 for four after 18 overs, Booths All Stars kept their chances alive but Mohamed’s dismissal in the penultimate over ignited Speedboat further as they went for the jugular.
Drama unfolded in the final over as Booths All Stars needed 10 runs with four wickets still intact. They managed a mere five as Harold, bowling with unerring accuracy, shattered the stumps of the last four batsmen to set an invasion of the playing area by the Speedboat supporters. Harold, who had failed to pick up a wicket in his three previous overs, finished with the impressive figures of four for 22 while Greg Singh took two for 13.

Earlier, Speedboat had no hesitation in opting to bat first but their cavalier approach saw them losing wickets frequently as they were shot out for 128 in 17.1 overs with Vickash Dhaniram (27) being the only player to reach double figures. His knock included two fours and two sixes.
The main destroyers were C. Ramdhani (three for 31), Y. Sooklall (two for seven) and Roy Persaud (two for 34).
Apart from copping the man-of-the-match award, Mark Harold was also voted the Most Valuable Player in the Open category, taking away a gold bat pendant, courtesy of Steve’s Jewelry, a similar prize won by Ramo Malone in the Masters category.
As an incentive for their winning of the Open category, Speedboat’s participation in the Orlando Cup, set to be held in March 2018, has been assured, compliments of the GFSCA.